Dan’s Law was put in place to legalise the cultivation of medicinal cannabis in Australia. But was it all for nothing?

You got here! Great! Thank you for clicking through.

If you’re reading this you’ll probably already know that things have gone badly wrong with medicinal cannabis in Australia, but exactly how wrong have they gone and more importantly what can be done if we’re going to put matters right?

In brief, rather than making things easier, the legislative changes of 2016 which were supposed to make cannabis and cannabis products available to sick Australians have barely improved matters at all. Patients still struggle to obtain such medicines legally while a huge black market has developed servicing hundreds of thousands of people, dwarfing the c. 2,000-strong ‘licit market’ by orders of magnitude. The products supplied by this illicit market are of course of unknown quality and safety, completely illegal and are being used without medical supervision, placing thousands of sick people in harm’s way.

This remains true no matter how hard the Government tries to spin the story of how great it is that over over three thousand prescriptions have now been approved and that it’s medicinal cannabis Framework is a success. We can promise you, it is not.

The fact is, ‘approvals’ do not equal numbers of patients when repeats, trials of different products and unfulfilled prescriptions are taken into account – and most of these are in any case concentrated in just a couple of States.

This has happened because when the 2016 law was written the Government had just one major aim, which was to make sure Australia complied with International Drug Treaties in order to protect this country’s lucrative poppy straw trade (we supply over 50% of the world’s raw materials used to make opioid medicines).

Apart from this though, no other objectives were created in terms of what the 2016 legislation was supposed to achieve – meaning quite literally no-one in Government was or is able say whether the legislation has succeeded or failed – because apart from compliance with these Treaties nobody decided from the outset what the new law was intended to do.

It’s no wonder then things have become such a mess.

But it gets even worse…

A knock-on of the 2016 legislation has been that medicinal cannabis and other cannabis products fall into a state of permanent ‘regulatory limbo’. They are – quite literally ‘approved unapproved medicines’.

If that sounds insane, it’s because it is! But the upshot is that the only available access pathway to cannabis and cannabis products outside of clinical trials is one known as the Special Access Scheme – a Federally-run system which allows doctors to prescribe such unapproved medicines. But this is to be used only as a last resort, for use in ‘exceptional clinical circumstances’.

On top of this State & Territory Health Department approval is also required resulting in a postcode lottery developing with approvals in some states running into hundreds or more while others have seen just a handful or even none whatsoever.

Doctors meanwhile are starving for facts and knowledge about cannabis medicine since the Government has done nothing to help educate them while putting in place rules that actually prohibit Licensed Cannabis Producers from making critical information available.

Together, these explain why so few patients have been granted approvals (while thousands use products illegally) and why UIC feels the system is unfit for purpose.

Like everyone else we were surprised by the result of the 2019 General Election but we did at least manage to get Federal Labor and the Greens to share their respective policies via the Change.org website.

Whilst we appreciate we now need to re-double our efforts in engaging with Greg Hunt who remains the LNP Health Minister, at least the Labor and the Greens, via their respective positions, give us a number of important agenda items we can now take to Minister Hunt.

Regular updates will still continue to be posted on Change.org and we thank you for your continued support.

What is to be done?

We need get the system changed, it’s as simple as that.

If you want to help, we believe there are three things you can do that are likely to have a big impact so please, if you’re able to, try to take at least one of the below actions (all three if you possibly can):

Write to Greg Hunt the Federal Health Minister and ask him to improve patient access to medicinal cannabis.

Help us raise awareness by adding the “I stand with Dan” frame to your Facebook profile photo. 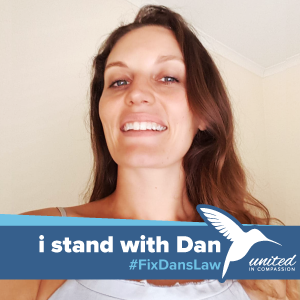 Dan Haslam fought cancer for several years. Many of those years he spent campaigning for his right to be treated with a legally obtained source of medicinal cannabis to help him through chemotherapy. On 24th February 2016 – exactly a year after his death – the Narcotic Drugs Amendment Act was passed which was referred to as ‘Dan’s Law’. This legalised medicinal cannabis cultivation in Australia for the first time in over five decades…

…but now bureaucracy is getting in the way of patient access. Let’s make sure Dan’s fight wasn’t for nothing!

Encourage your doctor to view talks from our 2019 Medicinal Cannabis Symposium as well as the previous events (and do so yourself!).

Featuring globally renowned specialists, doctors and academics at the forefront of cannabis science and technology, the speakers – from as far afield as Israel, Canada & the US – share their knowledge, skills and research in what these days is among the most exciting and rapidly evolving areas of study and clinical practice on Earth.

Finally, if you do this, know that you are supporting Australian patients who are really suffering out there – feeling abandoned by their Government and afraid that they are forced to break unjust, biased and ill-conceived laws just to try and stay well.